Hello folks!  Another week over and a new one beginning … just like that!I’ve been pondering what to write this week.  Not much has happened for me to report about home education … we’ve just been enjoying time in the sun and making the most of holidays … well, some of us have … to be fair on Mr GG, he’s been working hard as usual but this past week he was working from home which we all love. 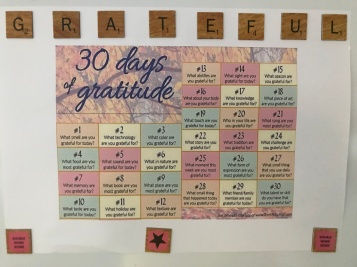 One of the things I’ve noticed lately is how easy it is for us all to slip into an attitude of entitlement … I’ve been trying to foster a sense of thankfulness and gratitude in myself as well as trying to encourage the boys.  A wee while ago I shamelessly stole this idea from a friend on Facebook … 30 days of gratitude.  Most evenings, as we eat our meal, we’ll discuss what we’re grateful for for that day.  There have been some interesting ideas and it’s fair to say that Son No1 nearly spontaneously combusted when he was tasked with naming just one piece of technology that he was thankful for!  At new year I set myself the challenge of recording something I was thankful for each day … I’m pleased to say that we’re now more than halfway through the year and I’ve not run out of thankfulness!Mr GG and I have set ourselves a challenge to reduce our spending each month as well as reducing our electricity/gas bill.  I’m enjoying the challenge although it seems that ‘living simply’ seems to make for much more work! Naturally one of the first ‘cut backs’ has been to dry our laundry outside rather than use the dryer.  For several years I’ve opted to give washing dried outside a wee blast in the dryer as it seemed to help with Son No2’s hayfever.  For many years he struggled so badly each year, ending up with eye infections and, sometimes, eyes that were so swollen they couldn’t open.  It was awful.  However, ditching the dryer this year doesn’t seem to have had much of an impact on him so it appears his susceptibility to hayfever has reduced as he’s got older.  Something to be thankful for! Simple living means I’ve been baking more which I’m enjoying.  I’ve always loved baking but tend to get caught up in life and fall into the trap of just buying biscuits etc.  One of the main things I bake is chocolate brownies … it’s a favourite of all three boys (well, four if you count Mr GG) and something I’ve baked with the boys so often that two in particular can make themselves with little intervention from me.  We also discovered lately that gluten free brownies are even more tasty that ordinary ones!

In the middle of the week I discovered a full packet of Lotus Biscoff which were going out of date soon.  Rather than waste the biscuits I made fifteens which, in turn, left me with half a tin of condensed milk I didn’t want to waste.  A wee google led me to this recipe … chocolate chip cookies … they are awesome!  I’ve never managed to make cookies that had the right crispy/gooey ratio.  These do!  And, even better, the cookie dough stores in the fridge for a week so I’ve been able just to make as many as I need at a time to keep the boys happy.  Win win!  I feel virtuous that I’ve not wasted anything and the boys are delighted with an almost daily supply of cookies.Bread has also been something that I’ve been making more often.  We have a breadmaker but I don’t really like using it … it’s bulky and takes forever to use.  I found an easy bread recipe which I’ve been trying out and the results have been delicious.  Previously when I’ve made bread I’ve been able to set the dough on the dryer to prove but that’s no longer an option so I’ve taken advantage of the sunny weather to set it on the windowsill of our front room.  Mr GG assures me that our neighbours already think we’re a bit quirky (chickens do that!) so they’ll not really be surprised by us!

We’ve already enjoyed some of the rewards of our garden in the past few days.  We have a lone blackcurrant bush (well, technically there are two but one is in the chicken run and only has two wee leaves left at the top … chickens do that too!) which has excelled itself this year.  While Mr GG loves blackcurrants, I can’t stand them so we weren’t too sure what to do with them … eventually we decided on jam … maybe seen as a bit of a waste of effort as this was the result, but Mr GG is enjoying it so that’s good enough for me (to be fair, he made the jam himself anyway). 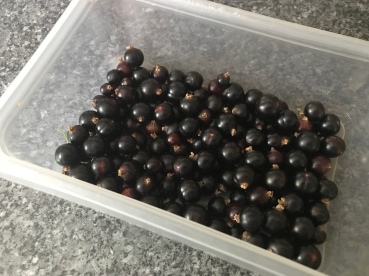 In this sunny weather I’ve been experimenting with infused waters rather than fizzy drinks or diluting juice.  Some have been successful, some not so much.  I’m enjoying gathering herbs and some fruits from the garden to try out and one of my favourites so far has been lemon, raspberry & rosemary.

Our faltering attempts at making our garden pay are beginning to show results.  Some of the potatoes are nearly ready for digging up and we have a steady supply of herbs, lettuce and salad leaves.  Not everything is working out though … the tomatoes are stubbornly refusing to perform and have, so far, only produced one manky looking tomato.  The mystery veg that we planted looks like it’s possibly peppers … no fruit appearing but I’m fairly chuffed that we’ve managed to identify it.   The peas we planted are mostly doing well and I can see some pods appearing … few, if any, of them will make it to the table for, in a nod to a happy days spent with my Grandad ‘helping’ in his garden, I’m likely to sit outside and eat them all.

Beryl, Ivy & Minnie continue to delight all five of the GG clan and have completely won over Mr GG who was adamant he didn’t want them.  They’re all laying pretty much every day and are ever so patient with me hopping about outside the coop waiting for eggs so that I can bake.  I have dreams of one day having meat chicks, and quail and maybe a pond for ducks, as well as an orchard with a bee hive or two, and a field with pigs, sheep and maybe a couple of cows (for Mr GG).  I can see me working in the fields in my wellies (pink of course, in a houseful of male-ness there needs to be some pink) and scooting about in my land rover.  But, for now, I’m content … I’m already seeing some of my dreams come true … home educating my awesome boys and chooks in the garden … truly living the dream!