It’s been a stunner of a week even if there have been moments when we’ve felt like we were melting.  The GG household doesn’t really ‘do’ hot weather and Son No3 was heard grumbling that he ‘can’t wait for winter’ (I think he’s a wee bit like Grandfather GG).  It’s fabulous seeing skies like this though … I love it!

We’ve had a mixture of a week.  Some lovely days out and some days at home enjoying our garden, our chooks and some shade.

At the start of the week we went to one of our most favourite places to go.  It’s not particularly beautiful but I love it simply because it’s one of the few places that my anxious Son No2 can go without worrying about anything.  All three of the Junior GGs are in their element on a beach so they were all content walking along searching for shells and other treasures, chatting about games and retro consoles (Son No1 collects retro consoles and had just bought a Nintendo 64).  We collected some teeny tiny shells … they’re amazing, so perfect and yet so absolutely tiny, it’s hard to imagine the little creatures that lived in them before moving on to a new home. 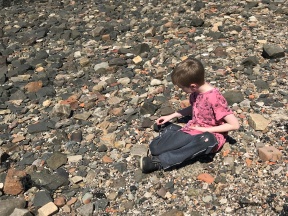 For weeks Son No2’s anxiety has been sky-high and his fear of germs, need to wash, worry about touching something that has touched something else that has previously touched something (I kid you not!) has been holding him back from enjoying pretty much anything.  When he was younger he had a fascination for mud and water.  I used to keep towels by the back door because there was nothing my lad liked more on a rainy day than sitting in the muddy dip under the swing and gently rubbing mud onto his face, over his clothes and, well, everywhere.  The water magnetism has stayed but the mud attraction not so much.   Surprisingly, I miss it!

So, it made my heart happy on Monday when I saw Son No2 paddling along in his shoes and then squelching about in the mud.  Everything washes and, once again, I was thankful for a sunny, cloudless sky to dry his shoes.  The shoes have since been worn to walk along a river so they’ve spent quite some time hanging about outside this week! 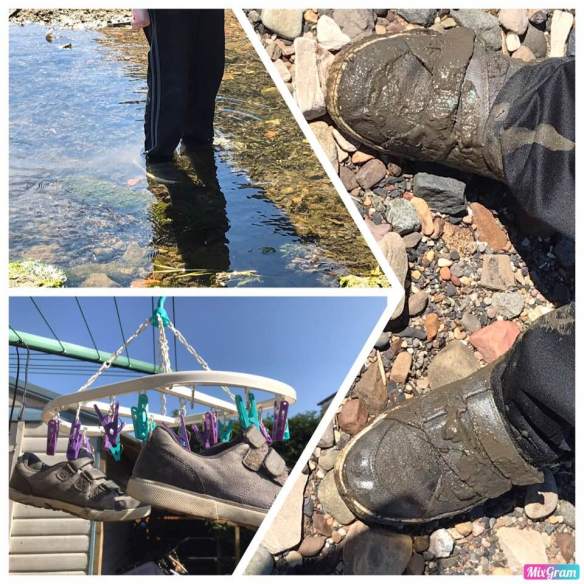 This week also saw Son No3 acquire a drum kit … it’s currently squashed into his bedroom until we work out how and where best to have it set up.  He is so excited … the neighbours maybe not so much.

We’ve enjoyed time out in the garden this week.  All of the fruit and vegetables that we’ve planted is growing nicely and there’s something really exciting about nipping out into the garden to gather something to eat (or make a cup of tea with) especially as we’re also getting (and eating) a regular supply of eggs from our chooks.  Over the course of the week I read somewhere that ‘smallholding is a way of life’ rather than dependent on how much land you have … I love that, our wee garden is tiny but we’re aiming to make it pay its way as much as possible.  That doesn’t stop Mr GG & I dreaming about having a proper smallholding one day but in the meantime …

Lastly, Son No3 tried out his latest tinker crate … an automaton.  He loved building it and is so good at following the instructions, asking for help when he needs it.  There are lots of good ideas for other automatons so I think that may end up on the plan for next week.  It may be a bit pricey but the pleasure my boy gets from building and playing with the tinker crates more than makes up for it.